When we think of culture, music, art and religion, we at once form an image in our minds, an image of the holy land of Bihar. The history of Bihar can be traced back to as far as the history of civilization itself. Lord Rama's wife, Sita is known to have been born in Bihar. The city of Pataliputra or Patna was founded by the great Mauryan emperor, Ashoka in 270 B.C. The religions of Buddhism and Jainism, a revolt against Hinduism, were founded in Bihar. Vardhamana Mahavira attained nirvana in this land and founded the new religion of Jainism. Another prince sacrificed all his worldly treasures and meditated under the Bodhi tree in Bodhgaya. 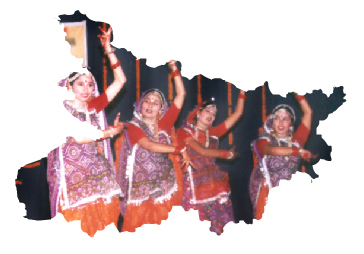 He too attained salvation from the continuous cycle of birth and rebirth and founded Buddhism. Today he is known as the Buddha. Chanakya, also known as Kautiliya, wrote the first treatise on modern science of economics, called the Arthashastra and he too hailed from this land. This land also witnessed the birth of the tenth and last Sikh guru, Guru Gobind Singh, who attained sainthood in Bihar.

The tribal and folk songs, as well as the varied dance forms of Bihar are a representation of the emotional upheavals experienced by the people, as well as their values, hopes, beliefs and traditions. The music and dance forms in Bihar are as many as the numerous tribal groups, filling the state with love, music, art and diversity.

The traditional Karma Dance gets its name from the Karma tree which stands for fortune and good luck. The dance begins with the planting of the tree, followed by circular formations around it. In this group dance, there are usually as many men as women dancers. The dancers form a two-tiered formation and the movements are usually backward and forward, towards and away from each other. The dancers swing to the rhythm of the drum and the clapping of the women folk. Later, breaking the formation, the dancers thread in and out and the body movements involve bending of the torso and the knees. The dancers put their arms around the waists of their neighbours and form semicircular rows. Each row of dancers sings and dances alternately to the accompaniment of the Mandur and Timki. Drums beat fast and loud and the dance ends on a happy note. The choreography is imaginative and the themes of the songs are contemporary and relevant.

Jhijhia is a prayer dance that originated in the Koshi region of Bihar and is performed during droughts, when the land is dry and parched and there are no signs of clouds in the lifeless sky. Through the Jhijhia dance, the young girls offer their prayers to the King of Gods, Lord Indra. The dancers pray to the Lord of Rains for life-giving rain and a good crop. The words of the song Haali Huli Barsaaun Inder Devta depict the conviction and deep devotion of the dancers as they pray to their Lord.

The Kajri Dance welcomes the beautiful season of Monsoon. The young girls of the village dance in gay abandon out in the open to express their joy at the approach of the season of fulfillment. The dance is usually performed in the months of Shravan and Bhandrapad. The young girls bathed in the romance of the season exchange notes with each other about their beloveds. Rain is after all, the sublime symbol of fertility, of succulence, of birth and rebirth.

Jhumar is a traditional folk dance of Bihar, which is performed by the rural women. There is no fixed season for this beautiful dance form, it is a dance, which is performed at all times. Spring descends on earth with its beauty and spreads joy and happiness all around. The women dance with gay abandon. The men folk are invited to join in and they usually provide the musical accompaniment. 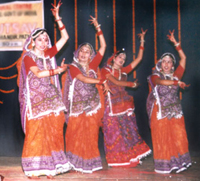 Bhojpuri music and dance is popular in Magadh and its surrounding districts in Bihar. Bhojpuri Jhumar is a famous folk dance of the Bhojpuri people. With the advent of Spring, nature blossoms into a riot of colour and fragrance. The people of this region welcome Spring with vibrant songs and dances. This rhythmic dance form is an expression of the joys and sorrows of the people.

The Magahi Jhumar dance is usually presented in the form of a duet, where male and female dancers play the role of husband and wife. They dance in unison, expressing their desires and aspirations. The wife asks her husband for good clothes and beautiful ornaments. The husband promises to give her everything she desires. This vibrant folk dance in performed to the accompaniment of melodious music.

The Jharni Dance is a ritualistic dance performed by the Julaha community during Muharram. The dancers use bamboo sticks split at one end. They stand in a circular formation, and move around, each dancer striking the stick of his partner. The sound produced provides the beat for the dance. 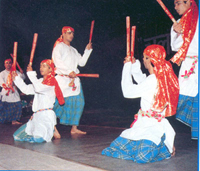 The women of the Mithilanchal region perform the Jat Jatin dance on moonlit nights during the Monsoons. Unmarried girls and young housewives assemble in a courtyard and accompanied by a drum, dance from midnight to dawn. As they dance, they enact in gestures the epic story of the love of Jata and Jatin. The most dramatic part of the dance is when a wicked boatman breaks through the dancing ring and kidnaps the beautiful Jatin. The lovers are separated but as in all folk tales all ends well and the lovers live happily ever after.

Jhumeri is a folk dance from Mithilanchal. After the month of Ashwin comes Kartick with its clear skies. On the full moon night of Kartick the young maidens of the village sing and dance to celebrate the turn of the season. The words of the Jhumeri song Kartik maas na akashey badari and the graceful movements of the dance cast a spell on the audience.

Sohar Khelwana is a dance performed by women to celebrate the birth of a child. In India, the arrival of a newborn is celebrated with traditional rituals. The child receives blessings from family members, neighbours and well-wishers. Through the Sohar songs, the women compare the new born to Lord Rama and Lord Krishna, popular Hindu Gods who are the embodiments of virtue. The eunuchs are an integral part of the celebration of childbirth and take part in this dance.

Spring arrives, resplendent in the colours of 'abir' as the magic of Holi sweeps across the land. Commemorative of the victory of good over evil, the Festival of Colours is celebrated with unabated enthusiasm by the young and old alike. Come Holi and the hues of the rainbow deck the air in fine mists, the streets in telltale smears and our hearts with the joyful hope that peace and happiness shall reign.

The Holi dance is a vibrant dance form of Bihar. The accompanying songs are sung in the Dhamar style.

Chhath is the most important and holy festival of Bihar, celebrated in the month of Kartick. The Puja is unique because it is possibly the only festival in which the devotees worship the setting sun before worshipping the rising sun. The first offering or 'Arghya' is done at sunset, after which the worshippers spend the night on the banks of the river Ganges. The next morning they offer 'Arghya' to the rising sun, before returning home. This prayer dance is performed with great devotion by the dancers.

In the months of Chaitra and Ashwin (during the Navaratri period), Shakti Puja is performed. Devotees believe that the Devi enters the body of a mortal on hearing the prayers of the Pujari. The dance depicts this divine presence in our midst.

The rains have quenched the earth's thirst. The sight of their fields rich with the golden crop fills the farmers' hearts with joy. They express their happiness through dances, which are rhythmic and enjoyable.

Chaita songs, as the name suggests, are sung in the month of Chaitra, when flowers appear in the mustard plants. Men sing these romantic songs.

The Nachni dances with her Rashik or male partner, to the singing and clapping of male accompanists. Nachni dances are presented at various festivals and special occasions. The Nachni is not only the dancer, but also the singer. The accompanying musical instruments include the Nagara, Shenai and Harmonium.

The Natua dance begins with an item called the Natua Kachal. In this duet performance, the accompanying musical instruments include the Nagara, Dhol and Shenai. The costumes worn by the dancers are indigenous and attractive.